Success! Your message was sent!

Posted by cbb_user in Blog , 0 comments

Spain will reopen its borders for European travel on June 21st, 10 days earlier than initially planned

Spain had previously planned to restart full EU travel on July 1st but decided to lift Â«border checks with all member countries on June 21st,Â» except with Portugal, Sanchez said in a televised speech on Sunday. 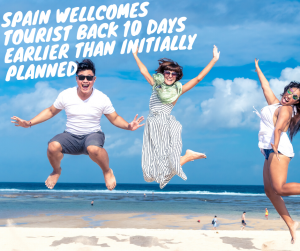 The country will also end its state of emergency at midnight on June 21st (the region of Galicia on June 15th) which will signal the end of the de-escalation plan (in place since early May) and the resumption of travel between regions.

The European Commission has asked all member states and Schengen area countries to open their borders by June 15th, but Pedro SĂˇnchez’s government initially seemed unwilling to change the nationwide opening of its borders to EU travellers before July 1st.

Regional authorities in Spain, which actually have the freedom to open their borders to international travel during Phase 3 of de-escalation, have overwhelmingly decided not to do so.

Any cookies that may not be particularly necessary for the website to function and is used specifically to collect user personal data via analytics, ads, other embedded contents are termed as non-necessary cookies. It is mandatory to procure user consent prior to running these cookies on your website.